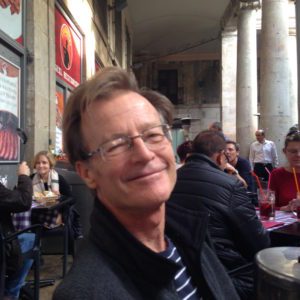 In his latest book, “Austin to ATX: The Hippies, Pickers, Slackers & Geeks Who Transformed the Capital of Texas,” Joe Nick Patoski gives us an insider’s analysis of the changes wrought upon the state capital and “sleepy college town” that became an alternative to the stereotype of “Texas Culture.” Joe Nick has chronicled many Texas “institutions” in his previous writings, including Willie Nelson, the Dallas Cowboys, Selena, Conjunto music, barbecue and many more typically Texan subjects. His weekly Texas Music Hour of Power, broadcast on KRTS FM Marfa Public Radio, has become a Saturday evening tradition for fans of Texas music.

Jon and Scoop spent an entertaining afternoon chatting with Joe Nick about his book and everything Austin. In this first of two episodes, Joe Nick gives us a history lesson on “Old Austin” and its journey to becoming ATX. “It was always an outsider’s city, contrarian and tolerant by nature, a refuge apart from the state surrounding it.”