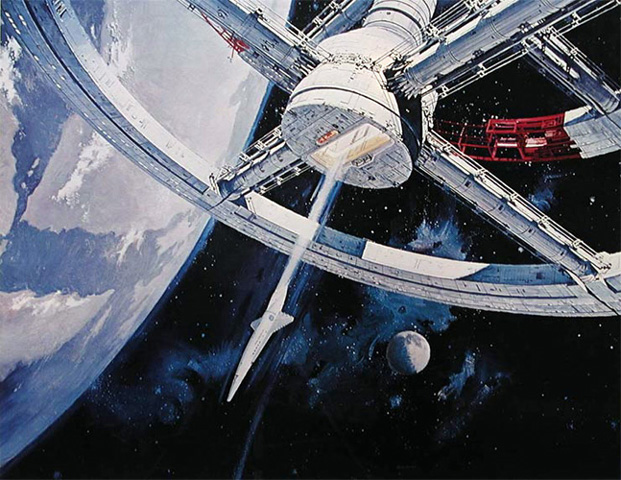 This year is the 50th anniversary of Stanley Kubrick’s enigmatic sci-fi masterpiece, “2001: A Space Odyssey,” and the film has seen revival screenings in 70mm and Imax (the spectacular Imax version recalls the original massive-screen Cinerama version.)

In this episode of the Plutopia News Network podcast, we discuss 2001 with film director and writer Alex Johnson, director of “Two Step,” and science fiction author Chris Brown, author of Tropic of Kansas.

2001 is a brilliant, expansive film about the evolution of humankind from primitive apes to an idealized star child. The science-fictional vision is that evolution is supported by the intervention and guidance of unseen aliens, represented by featureless black obelisks that appear at the dawn of man, and later to guide us beyond the stars and back again. The film has a few narrative bursts, and many longer meditative scenes – critics have said the film is boring – the New Republic’s review called it “a film that is so dull, it even dulls our interest in the technical ingenuity for the sake of which Kubrick has allowed it to become dull.” The film did find its audience, especially among younger people who were known to enforce altered states via various drug combinations before wandering into dark theatres with massive screens to watch.

Enjoy the discussion! We were putting ourselves to the fullest possible use, which is all I think that any conscious entity can ever hope to do…

This Article was mentioned on plutopia.io