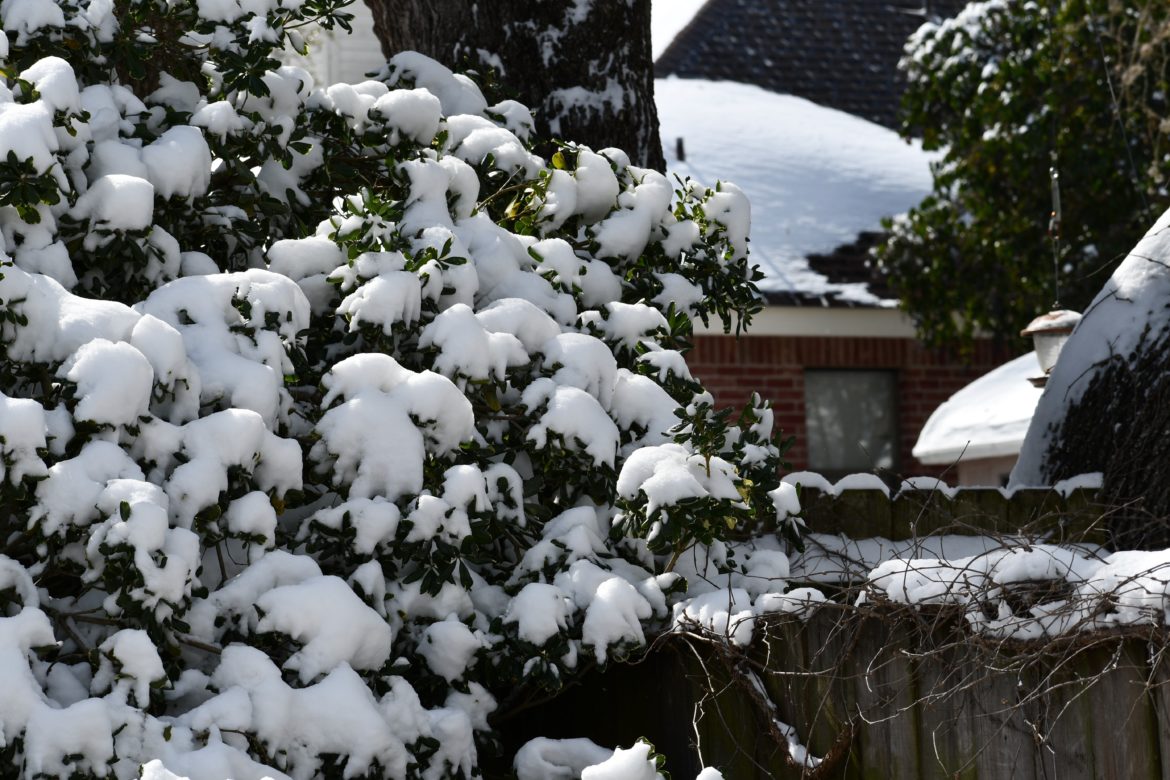 I’ve been posting about the crazy Texas snowpocalypse in a couple of places this week. I’ve compiled those posts here. Vox has a good explainer about how this storm relates to climate change: https://www.vox.com/22287295/texas-uri-climate-change-cold-polar-vortex-arctic

We’re having a snow day… a snow WEEK.

I’m always excited to see actual snow, since we have so little of it in Texas, and we’ve had a doozy. Beautiful white fluffy snow, like the middle of an Oreo, dropped overnight night before last, a blizzard in the dark.

But what we weren’t counting on was a broken statewide electric grid collapsing from the chill. We rarely have temperatures below freezing, and never as low as twenty degrees. But this incursion of the polar vortex has dropped temperatures almost to zero, and the Texas grid couldn’t handle the demand, all those heaters blasting at once statewide. As the grid, lacking adequate weatherization, lost power stations to the cold, our single-state electric grid, ERCOT, instructed power companies statewide to create rolling blackouts. However the blackouts didn’t roll – some households have been without power since 2am Monday. Austin Energy in particular has massive outages. We’re in a suburb that’s served by Pedernales Electric Coop, which is also enforcing blackouts, but without less effect than Austin, since it’s a rural co-op and not an urban utility.

We have power now, but our power was shut down yesterday around 2pm, and was down until 1:30am this morning. Our son lives nearby and had power, so we spent the night on an air mattress at his house. Our grandson and demented cat stayed here at the house, and reported when power switched on (much to our relief – we were worried about them). We also had no Internet service all day yesterday, but it was back online by the time the power was restored.

We’ve been extremely fortunate so far. We know of people who have been without power since 2am Monday as their homes grow increasingly chilly. Our daughter Tauna is one – she and her husband have stayed home with their three dogs, and unless their power is restored today, they’ll load up the dogs and relocate temporarily to our house. The cat will almost certainly be amused.

Bright snow nowhere near melting. Appreciating electrical power like never before. What a day.

My latest meditation was inspired by an analysis of the Heart Sutra “… when the Heart Sutra says ‘there are no four noble truths’ or ‘there is no form,’ for example, these statements are qualified twice—first by ‘in emptiness,’ and second by the statement ‘through the yoga, or exercise, of nonapprehension.’ In this context, in emptiness means in the state of absence in which all sense experience has ceased but the practitioner remains conscious. The state of absence can be attained through a particular practice, namely, the yoga of nonapprehension. So the sutra declares that, if we persist in this practice, we will experience a cessation of sense experience, at which point, for us, there will be no sense experience of any kind.” So I was practicing “nonapprehension” and emptiness-in-the-bones.

There’s a weather emergency here in Texas, I’m in the middle of it, I don’t know that I will have electrical power from now on, or will be disrupted again. (My partner Scoop says that his power has been 20 minutes on, 20 minutes off since yesterday). The sort of thing you read about, or hear on the news reports, happening somewhere else. A dangerous event. In the midst of it, it’s another day, a time to be awake, another frame of the film. Empty.

I didn’t see Abbott’s performance on Hannity, but I’m pretty clear he didn’t blame the Green New Deal as people will saying. I mean, not exactly. He apparently said that this demonstrates the real danger of the Green New Deal if it becomes policy, i.e. that we can’t rely on renewable and clean energy sources. Texas Republicans are scrambling to hang our problems on frozen wind turbines, but the impact of frozen turbines in West Texas is minor compared to issues with access to or production of natural gas, nuclear energy, and whatever other sources were impacted by the unusual-for-Texas cold.

He’s been pointing fingers at ERCOT, which operates the Texas grid. A real leader would acknowledge his role and responsibility, but Abbott is not up to the job.

Our power was back around 1:30am yesterday, so we returned home from our son’s house. Our daughter and son-in-law had no power, so they spent the night here last night. Their power was just restored. We’re all chasing points with power, trying to stay reasonably warm (though thermostats are turned ‘way down). Stores are closed, shelves are empty, streets are slick with ice (though it’s wearing down somewhat). Many people have been almost two full days without power, and are freaking out. Some people don’t have enough food. Some don’t have water. It’s a clusterfuck. But we’re okay right now, we’re lucky to have power back, and to have had a place to go.

In Austin, 90% have power, but an unknown percentage are without water, and those who do have water have to boil it. Austin Water can’t say for sure when water will be fully restored, because they don’t know what they don’t know about leaks – they have to bring water systems up systematically and find and fix leaks as they go. A substantial amount of water was lost to leaks between Monday and today, draining the reservoirs, which are now refilling since demand as been reduced. We have just a trickle of water.

We spent 12 hours without power (Monday overnight) but were able to go where someone did have power. Power came back early AM and remained on. We’re not in the Austin Energy area, but are just far enough away to get service from a rural electric co-op instead. Our power has stayed on.

We had water through Tuesday, but pressure started dropping mid-day, and we’ve been without since then. We’re following Frank Zappa’s advice: “Don’t eat the yellow snow.”

So WTF? Texas has a separate power grid because they don’t want to be subject to horrible Federal regs, like requiring winterization of equipment. Since it seldom gets very cold here, and pretty much never single-digit cold for any length of time, the various facilities providing power did not, in fact, winterize. There were also economic drivers for this state of affairs related to the way agreements and requirements are set up. I read about those but didn’t completely absorb what I was reading – but apparently there’s no economic incentive to take precautions against severe cold. I should note that the political “conservative” interpretation of the renewables vs natural gas complicity tries to make the case that a failure of wind turbines, which froze (because not winterized, which they don’t really mention), was a major issue. ERCOT (Electronic Reliability Council of Texas), the nonprofit that operates the Texas grid, doesn’t say that, however. Apparently much of the loss was attributable to frozen equipment in the system that delivers natural gas, and similar issues at nuclear facilities. Whatever the case, the grid started collapsing Monday, and they were apparently in danger of losing the whole grid, which would have left Texas without power for months (so ERCOT says). So they wanted to have rolling blackouts. However they needed to take so many offline that they didn’t have anywhere to “roll,” at least in Austin. Hence some people have been without power since Monday. Word yesterday was that ERCOT had fixed it’s problems, mostly, and 90% of the power was restored.

Meanwhile in Austin there were tens of thousands of water leaks, and at least one treatment plant without power. Some water mains broke. The reservoirs all drained, and water pressure dropped citywide. Right now they’re refilling the reservoirs to get enough pressure to track down and fix leaks, doing that systematically. Some Austinites won’t have water – they say for “multiple days,” but they can’t say how long, because they don’t have any idea where all the leaks are, and what it will take to fix them to the point that the system has integrity and service can be restored. Those who do have water are on boil water notices, and that will also last for days.

We’ve been lucky to have power, also we had drawn a lot of water before we lost pressure. Many many have not been so lucky. There are people without food, water, or power – no telling how many.

It’s pretty clear that Texas Republicans own this, whether they admit it or not. It ws their policies that got us where we are. You can trace it back to the decision to “secede” the grid. Notably Rick Perry said yesterday that Texans should be proud to suffer if it means we can avoid federal regulations.

Abbott is pointing fingers at ERCOT and pretending it was all out of his hands – following Trump’s lead of deflecting rather than owning a problem. Ted Cruz immediately left for Cancun when the shit hit the fan, but his trip leaked and he’s being lacerated right now from various directions, even from the right.

The snow’s been very pretty, and there’s lots of it. I’m about to shovel more into containers so we can flush our toilets.

Posted link to this in The Politics of Climate Change at The WELL.