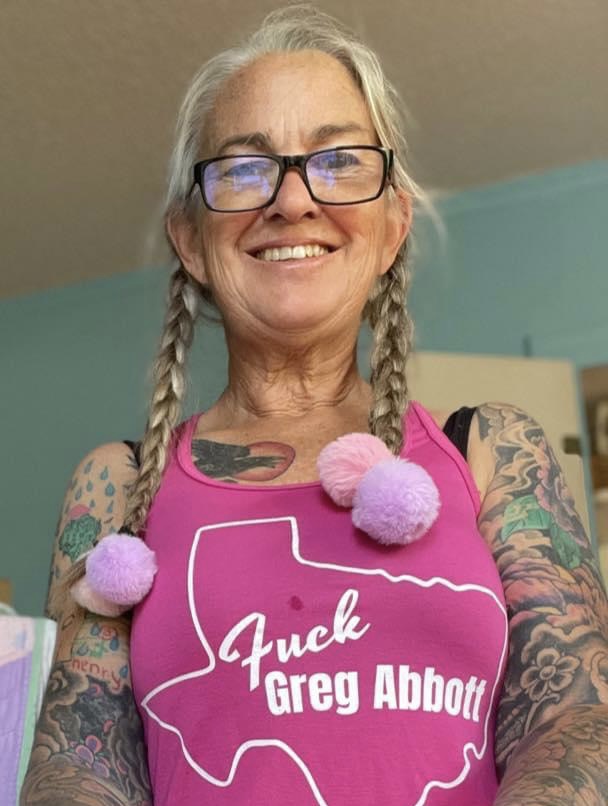 Rancher, author, activist and punk rock knitter Spike Gillespie joins Plutopians Maggie Duval, Scoop Sweeney and Jon Lebkowsky to talk about the challenge of small town politics in the crazy polarized 2020s. Spike has been raising hell since she was born with her fist raised in the air.

She is, among other things, an author, influencer, secular minister, provocateur, serial entrepreneur, social justice warrior, avid knitter, aging punk rocker, dog addict, great friend and dedicated spinster. Some say she is a witch, and she’s cool with that. She’s also known for her scones.

Her writing has appeared in The New York Times Magazine, The New York Times, National Geographic Traveler, Real Simple, Smithsonian, GQ, Playboy and many other publications. She is a former columnist for the Dallas Morning News and occasional commentator for Austin’s NPR affiliate KUT Radio. She is the author of nine books, including six memoirs and three in-depth books about quilting.

After raising her son in Austin for 24 years, Spike bought an abandoned meth lab and junkyard out in the country and converted it into an events venue whilst simultaneously hoarding livestock. These days she still visits the ranch often, in particular to love on her sheep, but has moved residence to historic Smithville, Texas, where she shares her historic mansion with five dogs, all of whom are at least half Wackadoodles, and one of whom, Milo, is her service dog and constant companion.

“The town decided that I had called City Hall and demanded that every flag in Smithville be taken down. Rumors spread – I mean, like wildfire. And I didn’t know what was happening at first, because I wasn’t on my computer. People are driving by my house in golf carts with Trump flags, American flags. And then I got a death threat. So these people have decided that I’m a piece of shit and they’re going to drive me out of town for something I didn’t do. I walked over to the police station, and I said “Look, I don’t want to tell you any names, I don’t want to file a report, I want to let you know I got a death threat. I’m new to town. Can you let me know will I actually be killed, or are they just trying to scare me? I just want to know.” And the guy wanted me to name names, and like, no. The whole thing culminated in… they had a parade on July 12. They got a parade permit. And it was a parade to drive me out of town, but they labeled it ‘a patriotic parade.’ I knew it was a parade to drive me out of town because 90% of the city government has come to my house. I’m not even going to tell you who, because this will just start another big ball of shit. But I would say no fewer than five city officials gave me the heads up that this was targeted at me.”

John Hagel: Passion of the Explorer