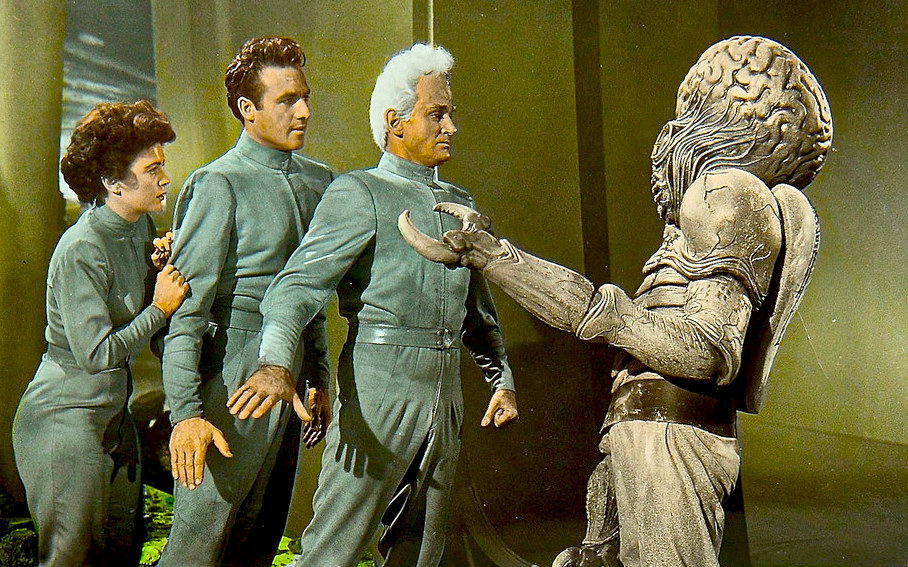 Before the Internet changed the way we experienced movies, dark theaters, and late night tv were the sole venues where sci-fi and horror fans could get a regular fix of cheap movie thrills. This time, on the Plutopia podcast, Jon, Scoop and Maggie discuss their favorite classic films, from the golden age of sci-fi and horror.

Scoop: My Mom asked what happened to the milk on Saturday morning, when I was headed off to the movie. I just told her I drank all the milk!

Jon: You didn’t pour it down the sink, did you?

Scoop: Of course, I did! I wasn’t that big a milk fan.

Jon: Yeah, I mean – this was a great thing about that era. I don’t know that there’s anyplace in the world that they do this now.

Maggie: Well, you guys had that story of the theater… for me, I’m about ten-ish years behind y’all. You know, so it was late 60s or early 70s for me. And we didn’t have the theater thing, but we had a really great UHF station in the D.C. area. It was always this thing, like, in the morning you would have Saturday morning cartoons, which is great, and I could have my Quisp or my Quake cereal, and then in the afternoon, it was all the old sci-fi and horror movies. So I have this fondness for that time, it was so cool… scared the crap out of me!

Plutopia News Network Sci-Fi Saturday: "The Earth Dies Screaming" as aliens kill all but a few humans, sending malign robots to kill survivors and activate corpses as dead-eyed zombies. Score by composer Elisabeth Lutyens. The title was a joke that stuck. https://t.co/6yQGdZq4x1

Plutopia News Network Sci-Fi Saturday – "The Monster That Challenged the World": giant mollusks from beneath the ocean floor "out of the nightmare of time" raise a ruckus in the Salton Sea, attacking livestock, lovers, and rabbits. https://t.co/n8KNN2wbP4