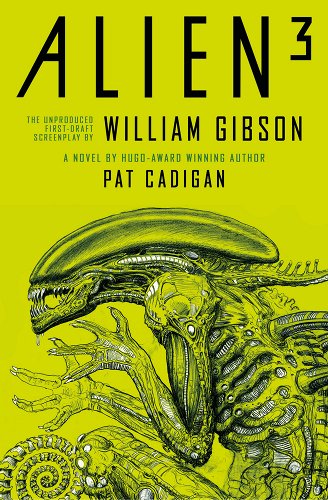 Hugo award-winning author Pat Cadigan joins Jon and Scoop to discuss her novelization of William Gibson’s first screenplay for Alien 3, the third movie in the Alien franchise. The final film wasn’t based on Gibson’s version, which had been discarded in rounds of rewriting and re-visioning. Sadly, critical response to the film was not good. Pat has created a novelization of Gibson’s first script , approved by Gibson and hailed in reviews as far better than the movie.

In this interview Pat, aka the Queen of Cyberpunk, mentions how Alien is a good fit for the cyberpunk techno-dystopian ethos.

Synopsis (via Penguin/Random House): “The Sulaco—on its return journey from LV-426—enters a sector controlled by the “Union of Progressive Peoples,” a nation-state engaged in an ongoing cold war and arms race. U.P.P. personnel board the Sulaco and find hypersleep tubes with Ripley, Newt, and an injured Hicks. A Facehugger attacks the lead commando, and the others narrowly escape, taking what remains of Bishop with them.

“The Sulaco continues to Anchorpoint, a space station and military installation the size of a small moon, where it falls under control of the military’s Weapons Division. Boarding the Sulaco, a team of Colonial Marines and scientists is assaulted by a pair of Xenomorph drones. In the fight Ripley’s cryotube is badly damaged. It’s taken aboard Anchorpoint, where Ripley is kept comatose. Newt and an injured Corporal Hicks are awakened, and Newt is sent to Gateway Station on the way to Earth. The U.P.P. sends Bishop to Anchorpoint, where Hicks begins to hear rumors of experimentation—the cloning and genetic modification of Xenomorphs.

“The kind of experimentation that could yield a monstrous hybrid, and perhaps even a Queen.”

Tom Miller Redux: A Plutopia flashback to an early episode.